Prabhas – The Superstar of Tollywood 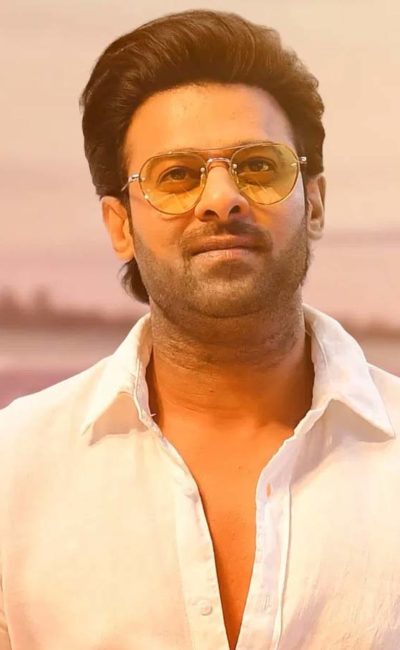 Prabhas: The superstar of Tollywood

Uppalapati Venkata Satyanarayana Prabhas Raju[1] (born 23 October 1979), known mononymously as Prabhas, is an Indian actor who works predominantly in Telugu films along with Hindi and Tamil films. Prabhas made his screen debut with the 2002 Telugu action drama film Eeswar. He has garnered the state Nandi Award for Best Actor, for his role in Mirchi.[3] He made guest appearance in Prabhudeva‘s 2014 Hindi film Action Jackson.[4] Prabhas is the first south Indian actor to have his wax sculpture at Madame Tussaud’s wax museum.[5]

Prabhas was born to film producer U. Suryanarayana Raju and his wife Siva Kumari. He has two siblings, a brother named Prabodh and a sister Pragathi.[2][6][7] He is the youngest of the three children.[8] He is the nephew of Telugu actor Uppalapati Krishnam Raju.[2] Prabhas attended the DNR School, Bhimavaram and graduated with a B.Tech. degree from Sri Chaitanya College, Hyderabad.[9]

Prabhas started his movie career with Eeswar in 2002. In 2003, he was the lead in Raghavendra. In 2004, he appeared in Varsham. He continued his career with Adavi Raamudu and Chakram.

In 2005 he acted in the film Chatrapathi directed by S. S. Rajamouli, in which he portrays the role of a refugee, exploited by goons. It had a 100-day run in 54 centers.[10] Idlebrain stated that he had a unique style and macho charm in his screen presence.[11]

Later he acted in Pournami, Yogi and Munna, an action-drama film came out in 2007, followed by the action-comedy Bujjigadu in 2008. In 2009 his two films were Billa and Ek Niranjan. Indiaglitz called Billa stylish and visually rich.[12]

In 2010 he appeared in the romantic comedy Darling. The film opened to positive reviews. The Times of India gave a two and half star rating explaining “Director Karunakaran extracts good performances from his actors, but can’t come up with a refreshing plot. It looks like the director hasn’t really come out of his Tholi Prema hangover as he dishes out yet another one-sided love saga but fails to come up with a valid and logical reason to make a Gen Z lad to hold back his feelings for his lover until the last moment. However, he compensates it all, by adding loads of fun moments in the film and the screenplay does have its share of some touching moments.”[13] In 2011, Mr. Perfect, another romantic comedy.The review site GreatAndhra rated the film with three stars and noted “The film comes across as a clean, family entertainer and the intention of the makers must be appreciated.[14]

In 2012, Prabhas starred in Rebel, an action film directed by Raghava Lawrence. His next film was Mirchi. He rendered voice for a short cameo for the film Denikaina Ready.[15] Sashidhar from The Times of India stated, “The film belongs to hard-core Prabhas fans as the movie is stylish and visually rich but not much in content”.[16] Purnima Ranawat from NDTV said, “Rebel serves up fare for the mass audience. The film will be definitely liked by Prabhas’ fans. Watch it for the dancing talent of Tamannaah Bhatia and action skills of Prabhas.”[17] Radhika Rajamani from Rediff.com gave the movie one and half stars out of five and said, “Working with hardly any storyline, director Raghava Lawrence had made a film that is arduous to watch… Rebel is a movie for the masses and certainly not for the discerning audience.”[18]

Jeevi gave a rating of 3.25 out of 5, commenting that “First half of Mirchi is decent. Flashback episode which occupies 100% of second half is good. Climax could have been better. The plus points of the film are Prabhas, music and all-round orientation. On a whole, Mirchi has all the ingredients of a commercial potboiler”.[19] Mahesh S Koneru gave his verdict that “At the Box Office, the film will turn in a good commercial performance”, giving the film a score of 3.25/5.[20] Way2movies also gave a rating of 3.25/5, giving the verdict that “Prabhas rocks the show in this decent yet formulaic commercial entertainer”.[21] Super good movies gave the film 3 stars in a scale of 5, reviewing that “Go and Watch Mirchi, It entertains both Class and Mass. It is a worth watch.”[22]

From left to right: Prabhas, Anushka Shetty, Tamannaah, S.S.Rajamouli at the first look launch of Baahubali: The Conclusion in 2016